Harvest is a King of the Hill map. It's a shed with a broken roof with buildings across from it. In the Arena and Vs. Bosses versions of the map, the shed in the middle of the map has its roof fixed along with some other minor changes to the map. Most notably, it is bigger in size compared to the King Of The Hill variant. The upper levels of the buildings are perfect for Marksmen, with a smaller shed containing a health pack across from the buildings. These buildings also make it perfect for flanks.

After leaving the spawn, go through the buildings, but be careful as the chokepoints are narrow and a flank can destroy you easily. If you want to avoid that, go around the buildings, but try to avoid the sightlines of the Marksmen. Mechanics can set up a nest here, but try to be aware of Annihilators and Troopers. Then, head for the point. You're in a closed area though, so be careful. 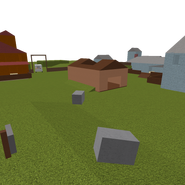 2014
Community content is available under CC-BY-SA unless otherwise noted.
Advertisement